Over 34 million adults in the United States, roughly 1 in 10, have diabetes. That rate is even higher within the Black community, particularly in Black women. This is often attributed to an increased prevalence of obesity in Black women — since being obese is the strongest predictor for type 2 diabetes — but new research suggests the link is not so simple and that special consideration for risk factors may need to be adjusted in this population.

Candice Price, an adjunct assistant professor in the Department of Molecular Biosciences in the UC Davis School of Veterinary Medicine, has been studying the mechanisms for developing cardiometabolic diseases, including diabetes in Black women, since her postdoctoral research days. Contrary to existing studies demonstrating that Black women are more insulin resistant (a precursor to diabetes) than their white counterparts, she wanted to understand whether the prevalence, or risk for developing insulin resistance, is greater in Black communities.

Price feels that a greater prevalence could potentially be linked to other biomedical and environmental factors as opposed to worse insulin resistance itself, which could be due to some underlying medical conditions. Her research on Black women could provide a clue for understanding the physiological and molecular mechanisms of type 2 diabetes and cardiovascular disease development in this community.

For Price, a first crucial step was to assess whether the traditional biomarkers of cardiovascular disease and type 2 diabetes risk, such as adiposity measures (body mass index or BMI, body weight, waist circumference, waist-to-hip and waist-to-height ratios, body fat percentage), apply similarly to Black women as they do in white women, given the same levels of insulin resistance.

To find answers, Price and her team conducted a steady-state plasma glucose test between two groups of Black and white women to measure peripheral insulin resistance (which was not considered in previous studies), fat distribution, and adipocyte characterization.

“This indicates that using BMI as a primary assessment for assuming or predicting insulin resistance in Black women is not reliable on its own,” Price said.

These findings open a discussion around the prevalence of obesity status and stigma, and whether simply looking at the body fat percentage, BMI and waist circumference are sufficient for predicting the risk of diabetes in Black women, or if there is a need for better race and sex-based biomarkers for metabolic risk profiling.

“This suggests to us that we really need to start reexamining the cut points of the traditional biomarkers that were really established from primarily white cohort studies, and whether the same could be said for Black women,” said Price. “Weight is still a factor in both, but the amount of weight deemed to be unhealthy may be at a higher level in Black women. In other words, having a BMI of 26 kg/m2 is considered overweight in the general population. However, recent studies demonstrate that this BMI may not actually be unhealthy in Black women; the cutoff is at a higher BMI.”

The Importance of Fat Distribution and Role of Sugar Intake

The Black population, Price said, has been a disproportionate consumer of sugar-sweetened beverages compared to any other race or ethnic group in the U.S. due to unfair targeted marketing and poorer food environments. Her pilot study stems from her efforts to reduce health disparities in Black women by focusing on prevention as well as understanding how sugar-sweetened beverages can increase the risk for cardiometabolic diseases.

When asked if sugar consumption or body weight plays a larger role, Price replied, “Sugar plays a larger role. The most important factor about sugar is that its effects on increasing cardiometabolic disease risk factors are direct and do not require weight gain. High sugar consumption can also cause weight gain, but the type of weight gained is the critical difference. Sugar promotes fat storage in the liver and visceral depot (fat stored around our organs), whereas the same number of calories provided as a complex carbohydrate promotes fat to be stored in subcutaneous depots.” 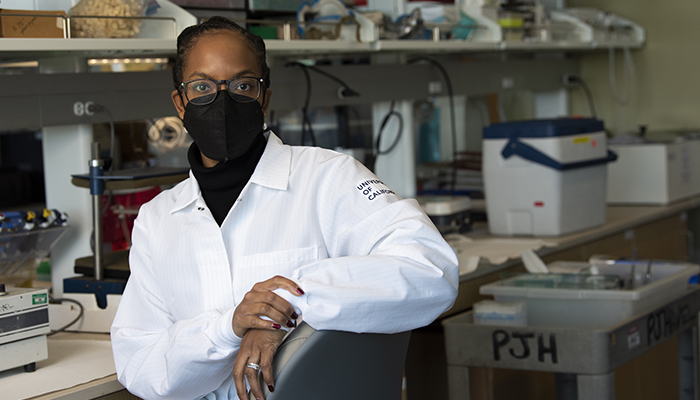 Candice Price wants to take the science back to the community. (Karin Higgins/UC Davis)

“We can’t assume that the mechanisms for developing cardiometabolic diseases apply equally to Black women, as they apply to white women, when we’re looking to provide personalized medicine or personalized interventions,” Price said.

Price hopes that this research will set the foundation to do more intervention work in the Black communities in the future.

“If we can get the data and the evidence, we can possibly educate and influence policy makers, which would be a huge win because we know that beverages disproportionately affect Black communities in part because of targeted marketing from the industry,” she said.

In addition to the metabolic impacts, Price wants to explore the psychosocial factors in combination with sugar consumption to help develop relevant public health interventions to reduce sugar intake.

From her research and her own experiences as a Black woman, Price realized that Black women face a lot of health disparities, such as hypertension, maternal mortality, birthing and breastfeeding related issues. As a member of the Perinatal Origins of Disparities Center, one of the IMPACT Centers within the Office of Research, Price is making a conscious effort to include these areas in her research repertoire. She wants to take the science back to the community.

Price’s entire research program is interdisciplinary and spans across the UC system with collaborators at UC Berkeley and UC San Francisco. At Davis, she just finished a gut microbiome project with Jonathan A. Eisen, a professor and microbiome expert. The team carried out a study to determine if gut microbiome profiles differ between Black and White women, and if so, determine if these race differences persisted when accounting for insulin resistance status. They found that Black women had a greater abundance of Actinobacteria, regardless of insulin resistance, and lower beta diversity (measure of similarity or dissimilarity of two samples) while factoring in insulin resistance, compared to white women, leading to different gut microbiome profiles. This difference may play an important role in driving cardiometabolic health disparities in Black women, indicating an influence of social and environmental factors on the gut microbiome.

She is also collaborating with the Simmons Lab designing a study to examine how to better assess and predict hypertensive disorders of pregnancy on Black women. Other campus collaborations include a community-engagement project led by Laura Kair, an associate professor of pediatrics, and community partner Golden Journey Empowerment to understand pregnancy, birthing and breastfeeding experiences of Black mothers living in the Sacramento region. Price is also collaborating with Reina Engle-Stone, an assistant professor in the Institute of Global Nutrition, on a pilot study to examine inflammatory markers, diet and health outcomes in Ghanaian women.

Price received the 2021-22 Chancellor’s Fellowship for Diversity, Equity and Inclusion for her contributions to address systemic issues in diversity, equity and inclusion that have chronically persisted in biomedical research. Price believes in the importance of representation. At her lab, she works with minority research interns pursuing a career in public health and medicine. Understanding the struggles of the underrepresented and creating a space for them to be visible and impactful has been one of the guiding principles since Price became a scientist.